Malina is a 4-year-old girl, wearing blue jeans and a yellow sweater with a white elephant. She has dark blond hair and is my Bosnian neighbour from ‘s-Hertogenbosch. Jeroen, some friends and I took her to Naturalis in Leiden. She is very curious, wants to know everything and loves to hide under tables, chairs and in trees. I love her because of her adventurous mind and her lack of fear. She’s a daredevil!

That’s why we didn’t care to leave her alone for some minutes. She was playing with mammuth bones on the 3th floor, but when Jeroen and I returned after 15 minutes, we couldn’t find her anymore. It was 4 o’clock and most families were already leaving, so it wasn’t that crowded anymore. We walked to the top floor (5) and started our search there. We asked several adults if they had seen her walking around. At that point, she turned into a 5-year-old.

We looked everywhere, especially behind cabins and showcases. I yelled her name around and we asked some adults if they’ve seen her walking around. They didn’t see her, but in response to this question they told us story’s about the last time they lost their own kids. These people became our associates. When we saw them again, they immediatly asked us about Malina. This happened a few times during our search.

On the second floor an employee of the museum noticed us looking for a girl. She asked us about her and in a mindless moment her name turned into Malinda. The employee then made a call. At that point the whole staff of the museum started looking for her. We agreed that Jeroen and I should wait on the second floor. I stayed near the stairs, Jeroen started looking around.

The buzz now became real. The staff runned up and down the stairs while looking for her, keeping in contact with their walkie-talkies. The worried employee kept asking us about our child. Where could she be? Was she afraid to be alone? What did she wear? The yellow turned into pastel. The elephant remained white. No glasses. And her hair? In a little tail, yes. I almost started to believe in Malinda myself now.

I texted Frans and asked him to call me in 8 minutes and I became a bit nervous. This was getting serious. The staff was already looking for more than 10 minutes and the fact that we still didn’t find Malinda created panic. Time was ticking. The museum emptied. When Frans called it felt like a relief. Jeroen joined me and when we encountered a random employee, we told him Malinda’s grandfather found her outside of the museum and that they could stop the search.

Confusion took over. Okay, she’s been found, but you have to stay here. The employee we spoke first would come back here. And now we turned into Malinda’s parents. The moment when we told Malinda was outside of the museum, they told us that she and her grandfather were walking on the bridge to join us. At this right moment! She’s been found! Huray!

We left the place as quickly as possible … 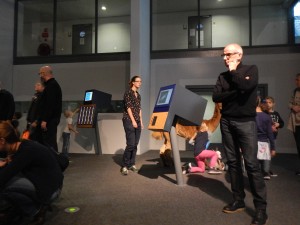 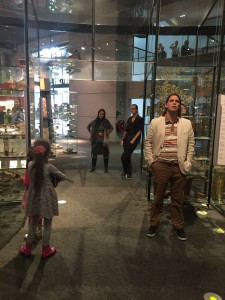 The second ParallelShow took place in the Naturalis Biodiversity Center in Leiden, the Netherlands. The choice of location might be a bit unexpected because it is not an art place. It is a museum for visual encounters with life in all sorts and that in itself seemed a very good reason to choose it for the ParallelShow. Another new aspect was the number of participating artists. We were six: Peter Baren, Jeroen Bouweriks, iwbdjdyatmvezdmnekzawvb, Mr and Mrs Gray and Frans van Lent. 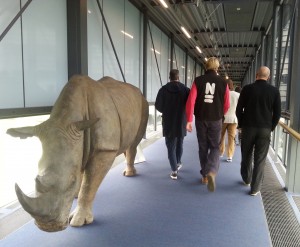 © PB
We walked together in a line through the corridor, from the central hall towards the exhibition building. During this walk we  immitated the (electronic) bird-whistling coming out of the loudspeakers above us.
We then started to explore the museum individually. After 90 minutes we gathered in the restaurant and discussed the possibilities.Many ideas came up, some were chosen to work out.
©MMGThe most distinct aspect was the number of parents with young children. The museum seems to be designed specifically for this targetgroup. The exhibited objects are presented not only to look at, but also to touch and to physically manipulate. The museum is mainly focused on interactivity, on making the experience as vividly as possible.Another aspect was the fact that every exhibited species is dead and stuffed, nothing moved of its own accord, all sounds came out of loudspeakers. This museum, dedicated to life in its broadest sense, only showes man-made immitations and dead animals. The visitors are learning about life by studying death. There was a tendency of (some) parents to withdraw into a state of lethargy in the background while their children were enjoying the attractions. By doing that they seemed to more or less approach the condition of the stuffed animals. It created a certain mirroring and we decided we could join them in doing that. 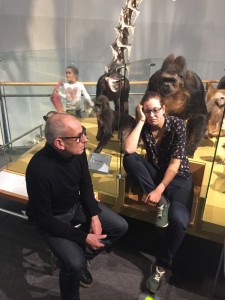 © FvL
Another concept was the devise of a lost child. Malou made up a 5-year old girl called Malina. ‘Malina wears blue jeans and a yellow t-shirt, applicated with a white elephant. She has long brown hair’. Malou reported the missing girl, together with Jeroen, to the staff of the museum, and by doing that she created an official search for this unknown living creature in the museum. This activity related to the adventurous searches organised to entertain the visiting children. Two concepts we could not carry out because of closing-time : – One was a training in patience by queuing where ever we found possibilities to queue. – And the second was a group-action of slowing down (stopping) for a short moment the 4 meter big globe in the geographical department. 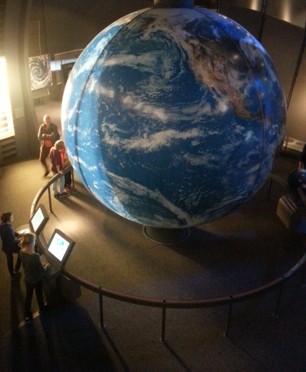