We started with 4 collective works. In one of the works Joana asked us to very softly touch the hanging lamps in Les Tombeaux of Christian Boltanski. The installation regained a touch of life. Even though it temporarily changed Boltanski’s work, It felt beautiful and respectful.
Part of the exhibition Lost in the City was a screen showing a (looped) 12 minutes fragment of the film In the Street (1947) by Helen Levitt. After I watched the film, it started again with a text about the subject: the life in the poor quarters of the big city. This text ended with: ‘The attempt in this short film is to capture this image’.
So I watched the film again the full 12 minutes and then made a photo of that particular frame.

The same exhibition showed the work Modern Tower 8 by Julian Opie. The sculpture was placed directly on the floor without the use of a base. Presented that way, it created a very convincing illusion of size.
I decided to stand very close to the tower to influence that illusion: viewers might look at me and by doing that they would miss the sensation of size.
They could also focus at the tower. That would include me in the illusion, would turn me into a giant. 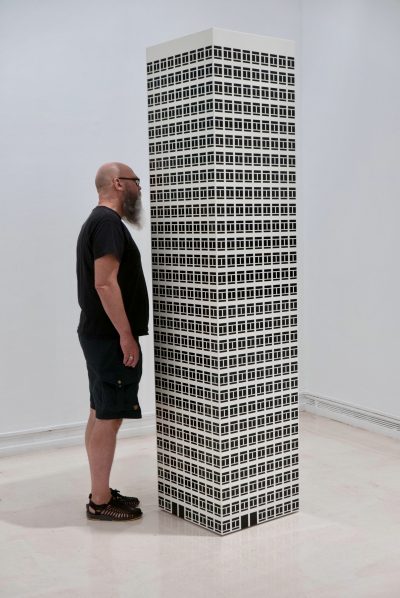 When we were spread out over the various parts of the museum, I sent around a text message.
In this message I asked everyone to choose a word and then to start looking for the other participants.
When we met someone, we should discretely exchange our personal words.

I was studying a work of Gregory Crewdson: – an old man crossing a wet street-, when I felt a person coming very close. Elia whispered a word in my ear. When I answered she quickly disappeared. I then walked out of the room and I noticed Joana. We just passed each other closely and softly spoke our words, almost at the same moment.
On another floor I saw Nico walking. I entered the space through smoked glass doors, and walked straight towards him. We both spoke out the words and I turned around and left again through the doors.
Then for a long time I was looking for Pepe. I vainly walked through all exhibition rooms and, a bit confused, I sat down on a bench in the hall. Just seconds later Pepe sat down next to me, looking a bit triumphant.
We said our words and these were the final words for both of us. 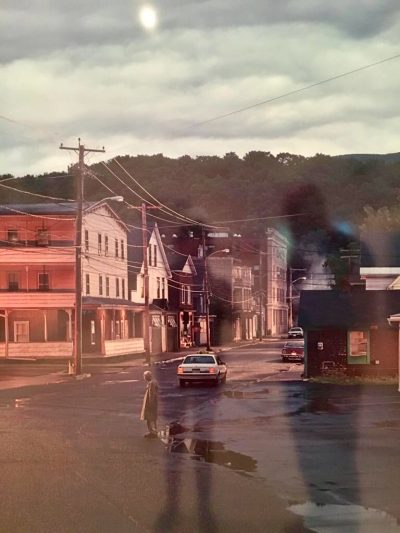 #8: Départ-Arrivée #8: From performers to conspirators