#6: Actions in the name of Apollo

For 5 years an image of the Tholos temple has been on my wall. I have marked a visual extension to it, by adding a picture of CCCP athletes exercising. When invited to participate in TheParallelShow, this image turned into a plan to be realized, along with encountering the sacred Omphalos stone and the Iniohos (Charioteer) up close.

On the site I had brought some props, that could be used if an opportunity occurred.
I did 3 actions using props and an intervention of gardening. Then, I followed the pre-existing plan, transforming the images on my wall into experienced events.

I. 3 actions using props in the name of Apollo, noted as instructions.

1. Tribute to the god of Light, Phoebus
Concentrate the Delphic light through a magnifying lens on the temperature-sensitive ticket of entrance to the Apollo’s temple, until shapes begin to appear. Stop immediately when the excitement of success is overcome, and you realize that you could be in control of the light and the shapes.
(Photo by Maarten / free entrance ticket found by Maarten) 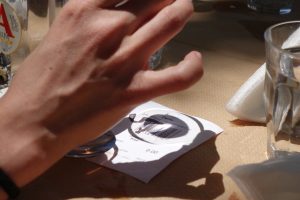 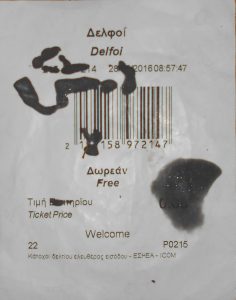 2. Tribute to the god of Locusts, Panorpius
Using a glass jar, capture a grasshopper (locust) in the archaelogical site. Focus on its structure, compare it with other structures attributed to Apollo, release. 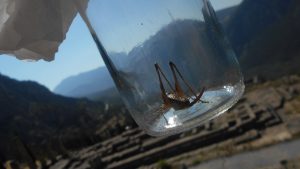 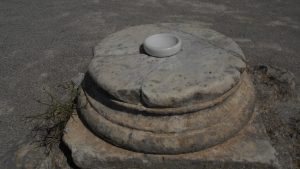 3. Tribute to the god of Marble, Marmarinos
Find a perfect fit for a contemporary marble object in one of the marble ruins. Does the contact between contemporary marble and ancient marble evoke thoughts of the sublime? Marble is in either case a material with eternal lifespan. Take a digital (immaterial) picture underlining the triviality of your own lifespan.

II. Gardening: an intervention
One of TheParallelShow’s basic instructions was that the performance should not leave any traces behind. At archaeological sites it is usually forbidden to remove anything from the site as a souvenir. Because succulent plants have the ability to be successfully replanted even without their roots, I removed 2 different kinds of succulent plants from the Apollo’s temple site and replanted them at the Athena Pronaia site, keeping a piece of each kind for my personal succulent collection. 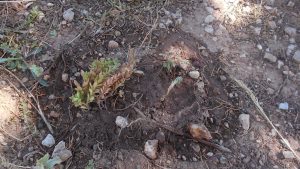 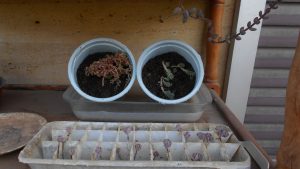 Replanted at the Athena Pronaia site and replanted at my succulent garden. 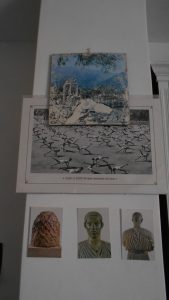 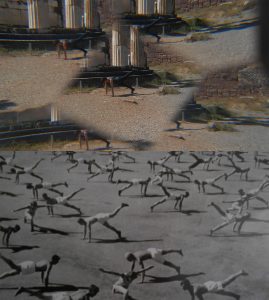 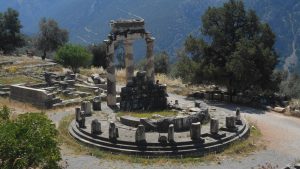 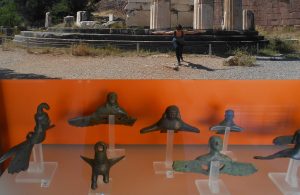 1.Encountering the Tholos at the Athena Pronaia site
Done.

2. CCCP athletes, exercises
Exercise 1: planking with one leg lifted (tripod plank).
Picture is taken by Jello, using a faceted lens to simulate the multiplicity of the athletes, as in the original image.
Exercise 2: the airplane
Visiting the museum after performing this exercise, the same posture was found on the mermaid figures that served as decorative handles for the Oracles tripod. 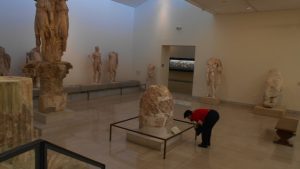 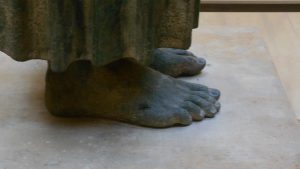 4.Encountering the Charioteer (INIOHOS):
A fly flew around the Charioteer room, and sat on his foot leading my focus there. These feet of exquisite craftsmanship, were not to be seen in the original sculpture composition, as they would be hidden behind the chariot. The fly gave me the terrible impression that the Charioteer had smelly feet. The brief illusion of bodily odor, once again confirmed the Charioteer’s vibrant mystique.