An art fair is about art but it is even more about competition, shortlists and commercial value.
It is a spectacle, loud, chaotic, overwhelming. Within these dynamics it is difficult to focus.
I decided to aim mainly at the social activities around the art.

Calls
In my pocket i carried a business model telephone. I asked my colleagues to call me on that phone as often as possible during the day. When they called me I never answered, I never got the phone out of my pocket. It just rang on till it automatically switched to voicemail.
I assumed the sound radiated a message of personal importance on one hand, and of arrogant indifference on the other: I clearly looked like a person people wanted to speak to and I chose to ignore the calls because I had ‘other things’ on my mind.
I hoped this made me more a player than an art lover.

Talks
The second work was connected to the first. as said I decided not to focus on the presented artworks, but to focus on people in and around the gallery booths. So I looked for acquaintances, for people I met before.
Whenever I recognised somebody and it was possible to approach the person, I started a short talk. Often it was just chitchat but sometimes it developed into an interesting conversation.
As soon as my colleagues noticed me speaking with somebody, they turned into an audience and were consciously observing the dialogue.

Looking at a work for 15 minutes
Ieke Trinks asked each of us to choose one specific work of art and to observe that for (at least)15 minutes. I chose the work Kalochrome by Michael Portnoy. In this work Portnoy uses image-steganography, a method for hiding (other) images within the encryption of the image.
Such a long-time observation fitted this work perfectly. This way it might be possible for me to enter its hidden layers.
So I stood there for fifteen minutes, studying the image. Slowly its surface changed, from just the depiction of a green kale into an abstract digital grid. There it stopped, nothing more was revealed.
The long time gaze took away the spatial illusion of the photo and in return it gave a clear focus on its actual material surface.
Some time ago I had this same experience in my performative work Polder. 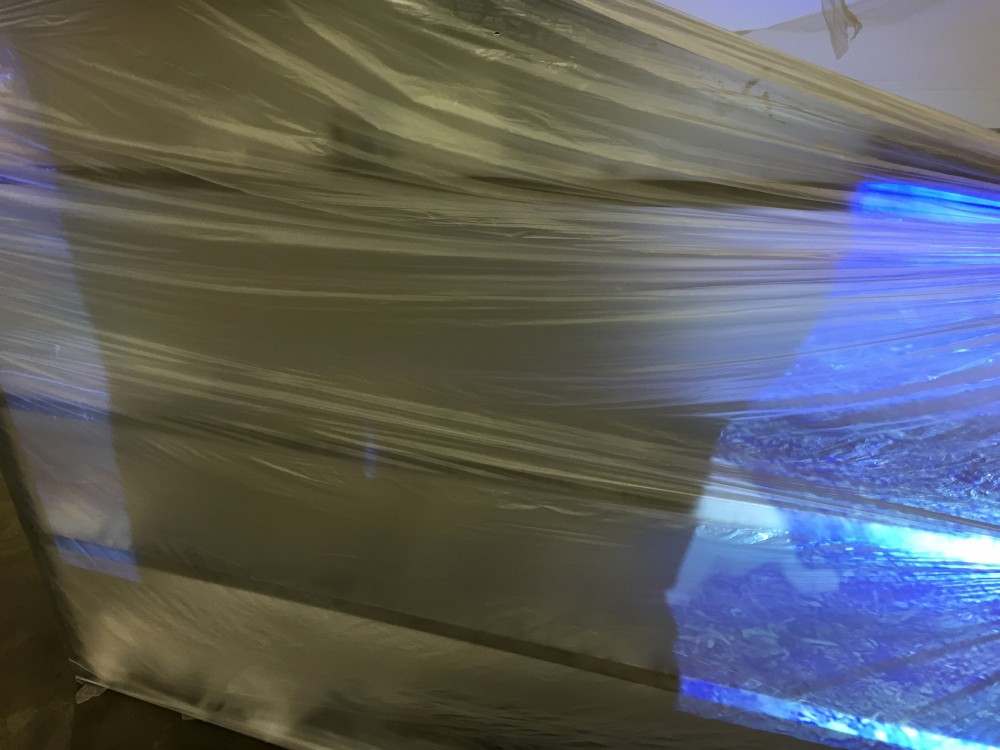 A new layer
Daniela Degen asked us to put ‘a new layer’ on a presented artwork, a gesture to influence its appearance, to change its aura. In an installation I stood between the beamer and the object it projected on. By blocking part of the beamed image I brought back the material qualities of the plastic projection surface. For a short time it regained some of its sculptural qualities.