#4: Chronology and the Older Artist

I suggested Tate Britain to Frans van Lent as a site for the Parallel Show for a number of reasons: scale – of building, spaces, audiences; range – of work, of approaches, of audiences; and because it specialises in British art, some of which is well known internationally, some of which is not. And because I have known Tate Britain for forty years. As ‘The Tate’, Britain’s principal gallery of modern and contemporary art, and then as the more specialised (and less definite but more assertive) ‘Tate’.

As a schoolboy it informed, extended and, to an extent, fixed my knowledge of modern and contemporary art. As an art student at Goldsmiths’ during the 1980s it was forty minutes’ walk or five minutes’ bus ride from the Millard Building between Camberwell and the Oval, where Goldsmiths’ Fine Art Department was sited throughout most of the 1970s and 1980s and I was a weekly or twice weekly visitor. I used to walk there every Sunday to call my parents as it was a place where public ‘phones were guaranteed to be functional. I learnt of the death of Joseph Beuys whilst in the gallery, as a I watched a curator walk across the centre of the Sackler Octagon and place flowers and a notice beside two of Beuys’s vitrines installed there. I have taken part in an occupation of the building to protest cuts in art education during the 1980s. I have been snogged by Damien Hirst at a Turner Prize opening, on almost the same site as Beuys’ flowers were placed. I was taken into the basement during Richard Serra’s ‘Weight and Measure’ installation and watched the massive spot-loadings shifting wildly and scarily on digital meters attached to acrow props. It is perhaps the art space I have the longest and most consistent familiarity with in the world and is a significant part of my personal history.

Chronology and the Older Artist
The current configuration at Tate Britain thematises chronology, not always comfortably. Dates are inscribed into the building itself, a chronological index.  We navigated and rendezvoused using chronological markers rather than cartographic ones. (“Where are you?”  “We’re in the 1960s!”).

This emphasis on chronology, on an awareness of time, of time passing, of one’s location within time, of personal time, was a prevailing consideration in approaching working in this context within the Parallel Show. I made two works:

1: ‘Phone Home
I re-enacted my weekly ‘phone call home of thirty years ago, usually on a Sunday, coincidentally the same day as the Parallel show. I found the site of the old public telephone acoustibooths, which was not easy as there has been significant re-configuration of stairways. I called my parents’ telephone number from the period I was a student. I had researched whether the number still existed, and had found that it is currently assigned to a child-minder living a few hundred metres from my old family home in South Queensferry, near Edinburgh. I was unclear as to how I should conduct the conversation if someone answered, whether to be clear about my actions, or to claim I’d dialled incorrectly. I even considered how to speak; whether to adopt my stronger native accent or use the less pronounced accent which has evolved over thirty-five years living way from home. I decided to wait and see what happened. In the end my anxieties and uncertainties were insignificant as there was no signal to my iPhone so my call failed. I was relieved. It was the act of calling that seemed important, and not the answer. Both my parents are long dead and my connection to the town and its signifiers such as dialing codes is broken. The ‘Call Failed’ message underlined an already understood condition. 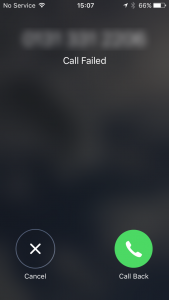 McLean is young, highly confident and amusing in the film. At 52, I am both older and younger than McLean (now 71) and Morris (now 84): relative to McLean’s film, I am 12 years older than the older Robert Morris and I am twice the age of the Bruce Mclean captured in 1970, but the young McLean maintains paradoxically the role of senior artist through historical contextualising. I used my shadow on the projection to participate in the film, endeavouring to stay under McLean’s mouth: In the Shadow of your Smile Bruce. 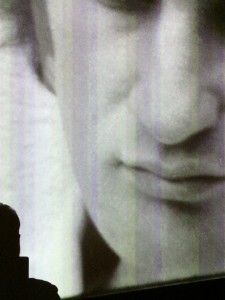 Note: I used the camera as a prop, to legitimate my actions to other observers. It provided a ‘reason’ for what could be considered mildly transgressive behaviour. The increase in darkened video installations has engendered a new set of informal protocols in the practices of looking at art. A presiding condition in the reception of art is that of the active viewer, moving in space relative to the work.

I have been ‘tutted’ and chastised for using my iPhone torch to navigate through the pitch black interiors of video installations in galleries and biennials. Art theorist and critic Charlotte Klonk is usefully critical of much of the practices used in the installation of the newer media and in the way that excluding light from many if these installations diminishes dialogue with other works:

“…I think the museum is a uniquely privileged place, at least in the Western world, for the exploration of issues relating to human social interaction, all the more so, because of the size and variety of its constituency. But film, video and DVD projections, at least in the way they are shown at present, do not contribute to this. Instead, the way they are installed continues to reaffirm the idea of the museum as a space apart, a space of private contemplation. “ (Klonk, C. (2009) Spaces of Experience: Art Gallery Interiors from 1800 to 2000, New Haven and London,Yale University Press. p223)

I would be interested in the history of the presentation of McLean’s work. I cannot imagine it was intended originally to be seen in the manner it is now presented.

Unrealised works:
1: I did not encounter anyone I knew
2: I missed the moment the lights were turned on in the (mostly unlit) Henry Moore room

Miscellaneous:
The notion of self-improvement, a factor in Tate’s conception, still pervades the galleries. I wanted to work with this, but was unable to within the time we had. Perhaps I improved myself without my knowing. Time will tell.

I think I saw a well known actor, but I’m not sure, so won’t say who.