While visiting the 15th-century department, I passed a museum guide who explained the qualities of the historical presentation to a group of 17-year olds. For his audience it seemed to be just an obligatory museum visit.

What struck me first: his dedication and second: his habit to use one-liners. One sentence I remember was: “The things  we want to see are displayed.”
Sarah Morris used many one-liners in her show. For some reason she needed to summarise complete works into single sentences. And it was often a sentence that, in my opinion, had little or nothing to do with the actual content of the work.
The subsequent exhibition was showing the work of Guy De Cointet, who was fascinated by playing with letters and figures. 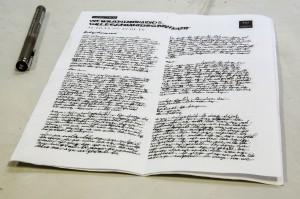 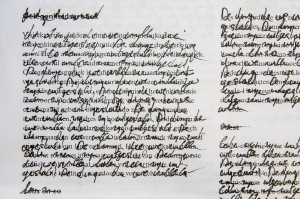