Thus began our meeting in Valencia. On our way to meet the double, a kind of ‘parallel’ Frans Van Lent in a jazz and chess club in the old town and… we got lost strolling through the city.

Sunday, September 18th 2016
We met at 11:00, opening hour at the IVAM (Valencian Institute of Modern Art). Frans, Nico, Pepe, Joana and me. TheParallel Show#8 had begun and from this moment, a story begins, a detective story, a story of the explorers of museums.

At the moment we crossed the museum frontdoor, none of us knew each other. We had to investigate and follow the trace of the artworks, building relationships and dialogues through a coded language between space, works of art, visitors and museum staff. At first, I went through a phase that consisted of me identifying with the environment, an attempt to achieve mimesis through empathy. For a moment, one ceases to be one self to be an other. The first feeling was invisibility. By the time I stopped being visible, I started to become audible: every certain interval of time I dropped my notebook. 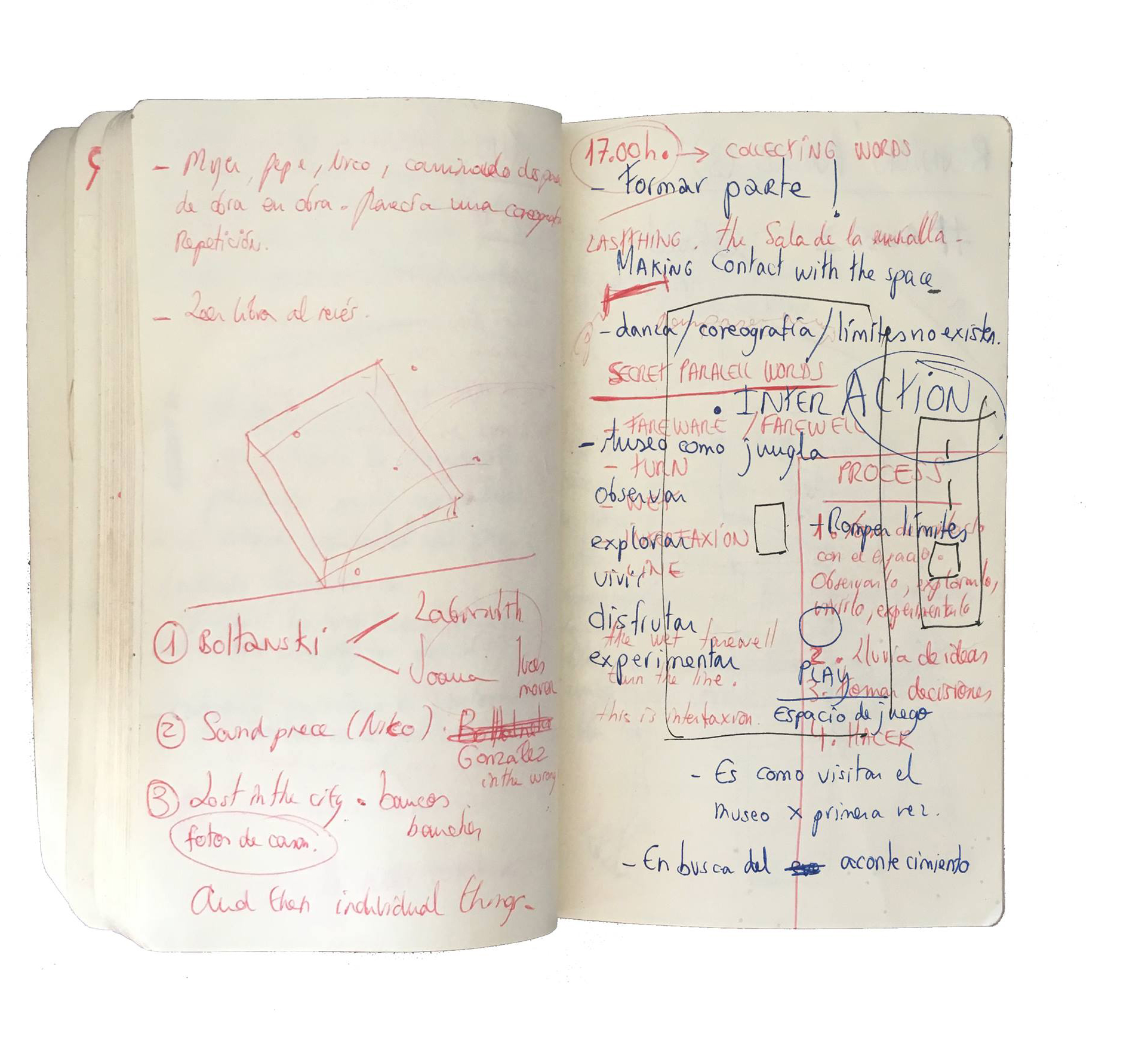 The first contact with the museum occurred through the light room. Light and darkness that created paths of absence and presence.
Silence.
In this room everything is calm, nothing moves and the light remains.
Still, unmoved.

It was in the hall of memory I began to dispel. An ethereal installation where one becomes volatile. A dance between fabrics that weave a reverie. Disappearance. And a figure emerges from the fabrics. We exchanged gazes and turned our backs to each other. We started walking in opposite directions, surrounding the maze. As we crossed paths, my notebook fumbled from my hands.

Points of departure and arrival (departure / Arrivé) that lead into a silent, cold and lonely labyrinth. A presence guards the entrance, so no one gets lost in between the walls’ stares. Absolute visibility. 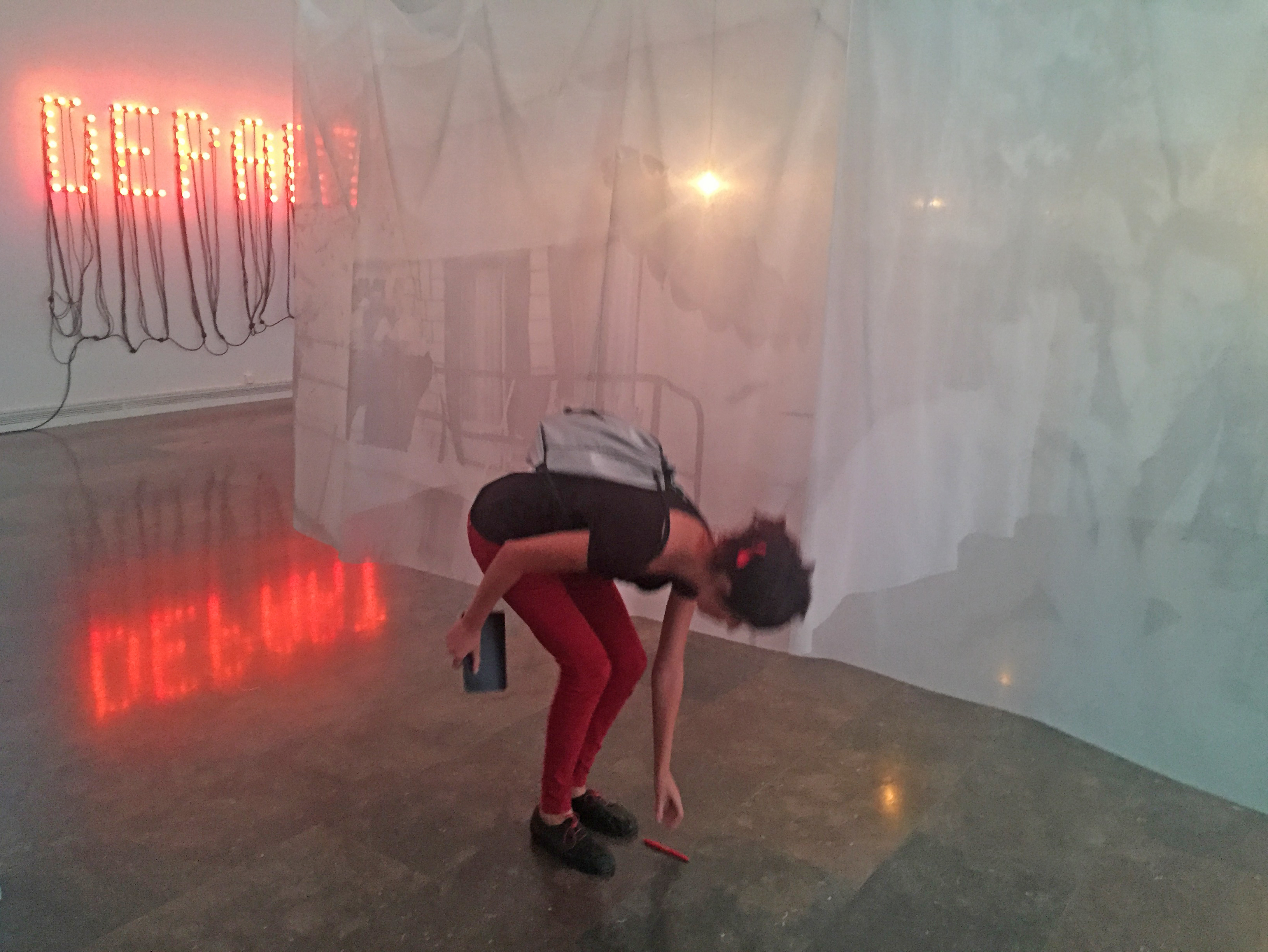 A change of scenery is perceived when crossing the hall. The coldness thaws, it reaches the hall of matter and figures, of lights and deep shadows. From the profound silence, one can perceive life, sound and motion.

Later, I begin to wander through the museum and suddenly I emerge in a city inside a city within a city. Contemplation and identification with the space inside space within space.
Walks inside walks within walks.
Readings that initialize or end a path of the reverse.  A trajectory that continues both around the building and it’s underground.
Crossing the museum’s boundaries, we found the room of the wall, where order and linearity acquire a resounding presence. The room of order transforms into the room of rhythm and sequence.

It´s 14:00 h. We meet, and in my notebook the following phrases can be found:
…
Making contact with the space.
Observing, exploring, living, enjoying, experimenting.
Throwback to childhood. Play, fun.
It’s like visiting the museum for the first time.
In search of an event, a happening.
The museum as a jungle.
The museum as a space of play.
Boundaries breached. Choreography of art.
Art, artists, visitors.
Inter-action.
Being part of the exhibition space.
Re-defining it. Re-living it. Perverting it.
…

We sat down and started brainstorming. Together we created a whole. A new language of relationships between space, time and bodies. Producers of meaning finally turned into word hunters.
LINE (Joana)
FAREWELL (Pepe)
WET (Nico)
INTERFAXION (Elia)
TURN (Frans)

LINE: In the room of light everything endures. Stillness, silence. Mysteriously, the light begins to spin. The rubbing of skin glows in elliptical shapes. The room comes to life. Let there be light, and there was light.
FAREWELL: In the labyrinth of memory, figures appear and disappear, come and go. They cloak themselves. Movements generated by the intertwining of streets that hide behind volatile silhouettes.
WET: The hall of matter and figures sounds like life itself, transforming into melody and movement. The room’s inhabitants produce footprints and footsteps, while a truncated voice is mellowed with sugar. Notebooks that lose their balance and shoe instruments make up an orchestra.
INTERFAXION: The wall hall has a linear rhythm. It is a sequence of works. And movements. It’s the dance hall in which new dancers join the repetition of pictorial contemplation.
TURN: The parallel show turned into a fun experience and a practice of freedom…a journey into childhood, to observe with new eyes and bring forth new issues. The parallel show doesn’t answer. It asks.
It is a language in which the body acquires importance in the exhibition space, where the event and serendipity itself shine and dance between the gaps of art.

And like all detective stories, a ludic promenade took place, in which the pursuers probably became the pursued.

A walk carried out by the detectives of museums, seekers of adventure, sliding under the attentive watch of the guards. A dance that was immortalized from the virtual. A drawing that seems to manifest that our actions took place in a parallel museum. 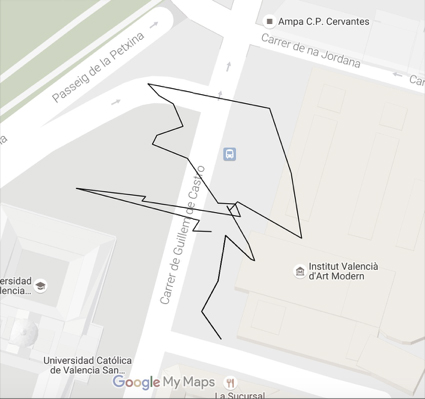